On April 30, 1983, Lois Main returned from a conference to her home in Coalinga, California.  Coalinga, an oil town of 6,757 people nestled in a small valley set in the Los Diablos Mountains, part of the coastal ranges of central California.  These mountains lie along part of the San Andreas Fault and are notable for their rugged fault-line ridges and canyons.  The area includes features with names like “Temblor Ridge” and “Joaquin Rocks,” one of the hideouts used by the famous bandit, Joaquin Murrieta.

Lois made it home that Saturday evening tired but committed to a calling she first felt upon her at the conference she had just attended.  That calling was to be earnest in intercessory prayer on behalf of others.  This was a new concept to her, but Lois was certain of it as her focus going forward.

The next morning, Sunday, May 1, dawned bright and comfortably cool as most early May mornings do in the Los Diablos Range.  The sixteen churches in town began to fill that morning, and plans were laid for the rest of a normal, lazy Sunday. Some of those plans included preparations for the annual Horned Toad Derby and Western Jubilee that was coming later in the month. 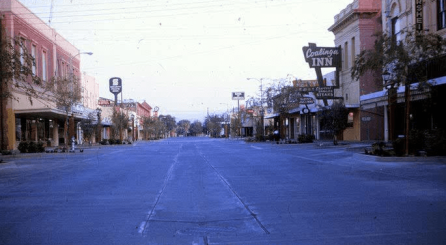 until my fourth year.  Attending the Horned Toad Derby was one of the highlights of my early years there as well as later when I returned to the town to visit friends and relatives.  This little town was prominent in my early life because it was a young explorer’s paradise, convenient for trips to the oilfields to explore, shoot rifles and pistols, look at oilfield equipment, and explore the rocky outcroppings along the fault lines.  I found Coalinga (pictured above, ca.1980) to be a perfect place to explore, connect, and belong even after my family moved away.

That Sunday morning, Lois Main awoke with a heaviness in her spirit that she could not shake.  And she was not alone in her feeling of heaviness.  Other women at her church indicated the same feeling, and some voiced concern that there were “children in trouble” in their town.  Many of these women later reported that they felt that way for most of the day. Later that evening, Lois felt that God was speaking to her about something ominous in the community

In the night, Lois awakened to a clear message from the Lord to her: “Pray for the people of Coalinga.  Get out and pray for My children.  Now.”  Lois got out of bed, dressed, and walked out into the night.  For hours, she walked through various parts of the town, praying, “O Lord, protect the people, watch over the children.”  Lois walked and prayed into the downtown district, then over toward the campus of West Hills Community College.  She continued in a route around the edges of the community, and finally returned to her bed around 5:30 AM.  Loins finally had peace that she had done what she was instructed to do.

Unknown to Lois Main, two other women were aroused in the night by the same message, “Pray for the people of Coalinga.  Get out and pray for My children.  Now.”  They also arose in the night to walk and pray over sections of the community.  The three women never saw each other on their prayer walks and were unaware that anyone else was out praying for the community. Later they discovered that they had all three been given the same mission, and found that they had covered nearly every street in the town

Monday, May 2, saw the town come to life as people went to work, to school, or about their business in the community.  Few if any realized the tremendous events that were to come before the sun set that evening, although several people reported that at 4:40 PM animals started acting strangely in various places in the town.  Cats suddenly ran to hide.  Dogs were agitated.  Even the horned toads for the derby burrowed under the sand in their cages.

At 4:42 PM, the pressure that was building at a single point along an undiscovered fault line let go, becoming a sharp and powerful earthquake.  The epicenter was about eight miles from Coalinga, and about

seven miles deep underground.  Immediately, houses began to shake, sway, then crumble.  Buildings downtown began to do the same, with the old-style brick facades on many of them collapsing into the streets. Most business were open, and the shops, sidewalks, and streets downtown were still occupied by the normal collection of workers and visitors.  Many families were home or on the way home from work.

The quake was sharp but short, and in a few moments the main shock has passed. In its

wake were over 800 buildings destroyed or damaged.  Many of these structures were so badly damaged and dangerous that they would be torn down without a chance to recover contents. A large number of people lost everything in the quake. More than 350 homes and other buildings were destroyed outright, with many more heavily damaged.

The downtown was devastated, with only two buildings salvageable.  The mayor was quoted on the national news saying, “What you see here is a case of instant urban renewal.”  The college on the edge of town survived due to its newer construction. The more modern frame houses did better than the older homes, although many needed extensive sheet-rock and glass repairs.  Not a single masonry chimney in town was still standing. My family’s cement block duplex escaped unscathed save for an evaporative cooler that tumbled off the roof. 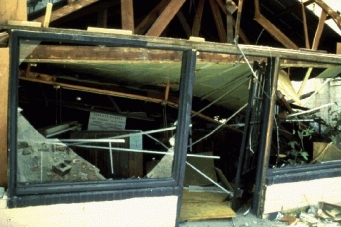 Interestingly, despite the severe damage to the community, there were only minor injuries to the citizens.  About 25 people went to the hospital for treatment with none being admitted.  Others were simply treated in the community over the next 24 hours. One man, a transient person from elsewhere in the state, was seriously injured and taken to a hospital in Fresno, California where he later died of his injuries.  Sadly, he was simply passing through the community, a case of being in the wrong place at the wrong time. 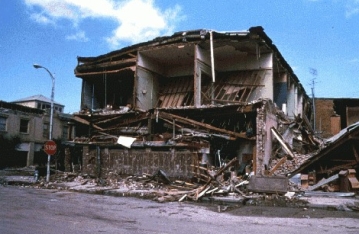 community could be so heavily damaged, especially in the downtown during business hours, yet so few people had any injuries.  Two women closed their shop early due to a clock that was several minutes fast.  As they exited to go home, the building began collapsing around them.  Another women ran out a side door of the business she was in when the earthquake hit, and was caught under the collapse of the brick facade.  A UPS driver and others dug through the bricks and lumber where they found her alive and unharmed.  Lois Mains and her family hid in a closet under the stairs when their home began to collapse.  When they emerged after the temblor, that closet and one wall were the only parts of the main floor of the house still standing. There are many more stories of people who experienced miraculous escapes in the midst of the destruction.

Clearly, our God was at work in that town on that day.  He prompted three of His servants to pray in the night, which He then leveraged into miraculous action the next day.  Does our God prompt us to pray?  Yes, He does.  Does praying make a difference?  Apparently so.

2 thoughts on “Prompted to Pray”