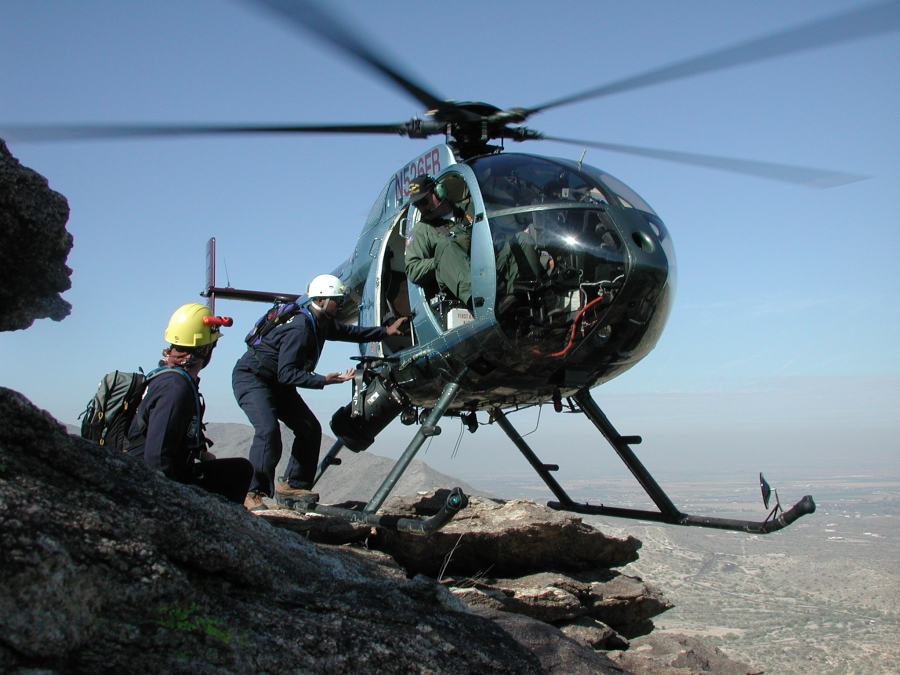 He had fallen and landed on a ledge.  He needed help.

I had a group of student climbers out on the rock for an all-day class on leading and anchors.  I could see another party on the rock to my left.  One of their members was laying on a ledge some distance below the top.  He looked to be injured and unconscious. When I called up to them to inquire, the leader indicated the man had fallen.

Calling my team together, we cleared our gear and hoofed it around to the top of the climb where the man was down.  Poor anchoring and belay practices had led to this man falling about 40 feet, head-first, onto a granite ledge.  He lay unconscious with potentially fatal head and neck injuries.  Yet he was fortunate in a way.  Below the ledge that had stopped his fall was another drop of nearly 300 feet.

We quickly set up our own anchors and belayed four of our team down to the ledge, where our two trained first-responders began first aid.  Soon, a California Highway Patrol helicopter arrived, and the tow officers gave us additional medical supplies. About 90 minutes later, a rescue team arrived and took over the leadership of this rescue operation.  The flight crew provided oxygen and IV fluids to the paramedics for use with the victim.  After nearly an hour of anchoring, lowering team members, and working on the victim, he was stable enough to move. Secured in the Stokes litter, he was safely brought to the top, transferred to the helicopter, and flown to a hospital some fifty miles away.  The victim survived.  The rescue and transfer were successful.

This story speaks to the gifts we celebrate each Christmas.  Gifts we can celebrate each day of the year.  Colossians 1:13-24 explains what I mean.  “He has rescued us from the power of darkness and transferred us into the kingdom of his beloved Son, in whom we have redemption, the forgiveness of sins.”

“Rescued us from the power of darkness….” “Rescued” is from the Greek meaning literally to be rescued or delivered out of  a situation in which a person is fully immersed. In this case He rescues us because we were already completely controlled by the tyrannical rule of darkness.  We were already goners.  Unless a rescue was initiated, we were doomed – beyond help, hapless, and hopeless.  And into this situation our God steps to rescue the helpless, hapless, and hopeless.  To rescue you and me.

But He’s not done.  It was not enough to rescue us out of our terrible predicament.  The passage goes on, “…and transferred us to the kingdom of His beloved Son.”  “Transfer” is from the Greek meaning removed from one place to another,  literally relocated to a new place or position.  Picture the helicopter rescue in which the person in precarious danger, helpless, hapless, and hopeless.  He had no chance for self-rescue, yet he was removed from the position of danger and transferred to a place of safety and assistance.  In like fashion, we are transferred into the kingdom of our Savior, Jesus Christ.

We were all like our hapless climber on the ledge.  Without hope on our own, and desperately needing someone to get us off the ledge and transfer us to safety and assistance.   This rescue, transfer, healing is what our God has offered to us.

This is why the coming of Jesus Christ to earth as a human is celebrated, for He came to rescue us from the power of darkness and transfer us into His kingdom.  In that rescue and transfer we also find the healing and rest for which we all long with the deepest of longings, which comes to us by our union with Christ through His indwelling Holy Spirit.

This is what we celebrate at Christmas, and hopefully what we experience every day, all year long.  May our God bless us, everyone.  Merry Christmas!