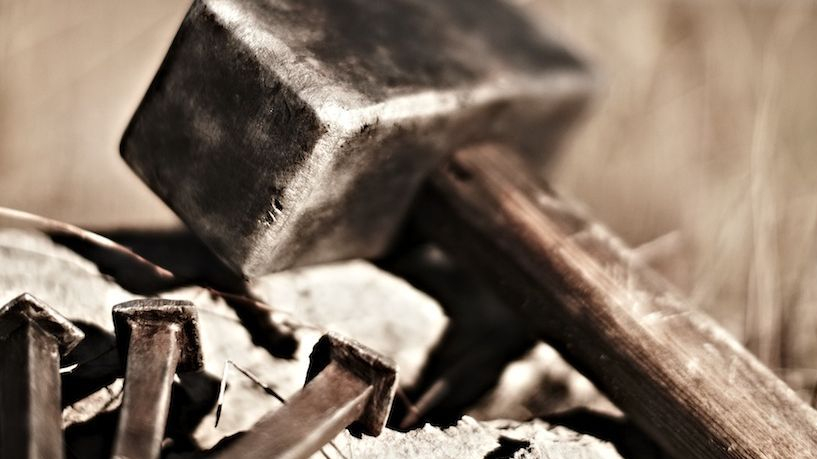 As we near the Easter celebration, the proliferation of bunnies, eggs, flowers, and pastel colors pushes and shoves the Easter story – the crucifixion, burial, and resurrection of Jesus of Nazareth – off the stage.  Instead of solemnity and introspection at the greatest human event in history, we are beset with sales, gaudy trinkets, and cheap chocolate.  More than a “religious travesty,” this transfer of the ascription of worth from the ultimate demonstration of love by a just and holy God to flowers, candy, cartoons, and animals represents an incomprehensible loss of scale by the human mind.  That we would reject the lofty notion of a God who loves us and desires communion with us so much He would take our place in death so we could take His place in life is truly beneath the dignity of the human mind.  Especially if we reject that lofty notion in favor of trinkets, baubles, candy, and cartoons.

The crucifixion of Jesus, His willingness to travel resolutely into the camp of His enemies and turn Himself over without a fight so that he might die in our place, is heroism and altruism of the highest and noblest quality. He deserved only worship and glory, while we deserved death as our punishment. He asked simply for our love and commitment to the life for which we were all created, the only life that will ever bring us true joy and peace.  We asked for His death by torture, and mocked Him on His way to the cross.

And mock Him we still do.  By our indifference to the weight of His sacrifice of love for each one of us.

The crucifixion demonstrated the love of our God for each of us and all of us.  And it demonstrated His justice.  We rebelled.  We rejected His rule and influence over us. In His perfect justice – and in His love – He would not have that rebellion and rejection stand unanswered.

Justice demanded death.  Our death.  Or, the death of one who did not have his own sin for which to pay.  The death of someone who had great enough value and worth to be a substitute for everyone, ever.  One death of a perfect sacrifice for all.

Some characterize God as severe, distant, angry, and unconcerned about the plight of people.  The crucifixion puts that view to rest to the open-minded inquirer.  What severe, distant, angry, and unconcerned deity would sacrifice himself on behalf of the people who not only rebelled against him but live completely unrepentant for rebelling?  Who don’t care about that deity?  Who continue to ignore, mock, and rail against him?

Justice was served in the crucifixion.  The Perfect Sacrifice was offered on behalf of all.  And when it was over, finished, and the cries of the onlookers trickled to murmurs and then to silence, what was left in the air?  The silence and the smell of perfect love.

Love was served in the crucifixion. The perfect love of a perfect God for an imperfect people.  The perfect love that sent the Perfect Sacrifice to the cross of torture and death to restore the perfect relationship between that God and the objects of His love.

That would be you and me.